As a native Virginian I quickly learned that barbecue (BBQ) is the root of disagreement in the Carolinas. There are endless "rights and wrongs” to BBQ preparation, sauce, how the meat is smoked, what side dishes to serve... the list goes on.

It’s a fascinating discussion that all Carolinians should contribute to. Keep reading to learn more about all things carolina BBQ.

How did BBQ find its way to the Carolinas?
BBQ was “discovered” in North Carolina in the late 16th century by Sir Walter Raleigh. In 1585, Raleigh sent men to the coast of present-day North Carolina. While there, John White sketched Croatan Indians “broyling their fishe over the flame—they took great heed that they bee not burnt”. What White witnessed was the Croatans using a “barbacoa”, a framework of sticks that supported meat over a fire. Barbacoas were used by the Spanish in the Caribbean after they saw locals using the contraption to smoke their meat. 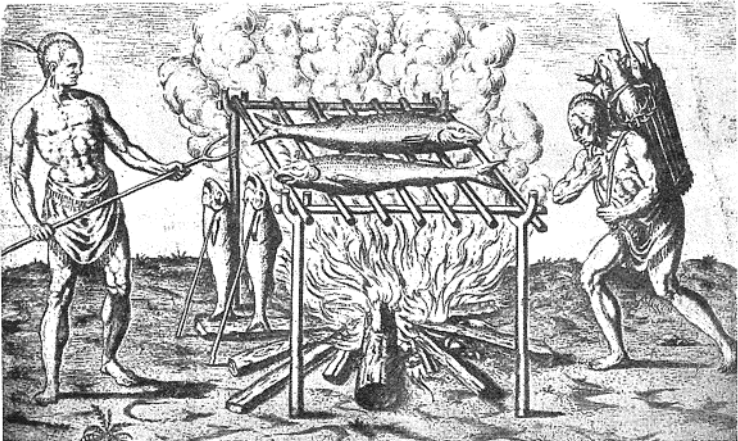 Historians believe that German settlers who traveled via Great Wagon Road during the mid-to-late 18th century from Pennsylvania influenced the style of barbecue in the North Carolina Piedmont region. Catawba College history professor, Gary Freeze, developed this theory on the basis that Pennsylvania Germans barbecued the shoulder of the pig and braised it in a fruit-flavored liquid similar to the Lexington style North Carolinians pride themselves on today. Freeze further argues that early prominent barbecue-ers had German names (e.g., Weaver, Ridenhour, Swicegood) and that some of the Piedmont’s earliest barbecuing occurred in German cotton-mill villages. 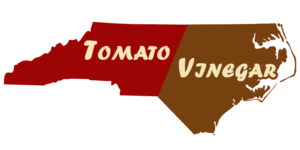 There are two main styles of BBQ in North Carolina—Eastern and Lexington (“Piedmont”). Eastern-style BBQ uses the whole-hog (“every part of the hog but the squeal”) with a lemon juice or vinegar, pepper-based sauce. Eastern style incorporates zero tomatoes in its recipe. Food critics are careful to say it is the “truest” form of BBQ, but many refer to Eastern-style as the “original” recipe [Our State article].

Piedmont-style became popular in the World War I era and uses meat from the pork shoulder with a vinegar, ketchup and spice-based sauce. Five men of German descent are credited with the adaptation of the Eastern-style recipe.

Sauce is another point of contention in North Carolina. The ingredients for the standard North Carolina BBQ sauce vary from family to family, but the “official” recipe is along the lines of this description found in Martha McCulloch-Williams' recollections:

“Two pounds of sweet lard, melted in a brass kettle, with one pound beaten,
not ground, pepper a pint of small fiery red peppers, nubbed and stewed soft
in water to barely cover, a spoonful of herbs in powder- he would never tell
what they were [of course!],  -- and a quart and pint of the strongest apple
vinegar, with a little salt.” -Holy Smoke: The Big Book of North Carolina Barbecue

South Carolina also believes that barbecue was “founded” in the Palmetto State, so  we will never truly know which Carolina barbecue calls home. We do know that South Carolina features all four sauces throughout the state, a trait they pride themselves on. 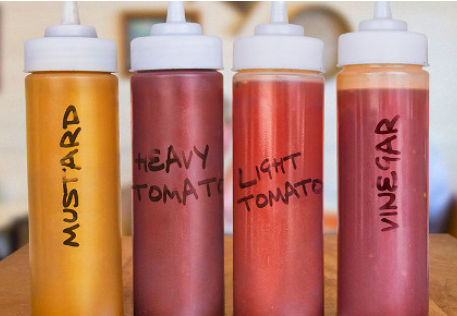 1) Mustard: Found throughout the midland part of the state toward the lower coastline. Distinct tasting sauce traced back to German settlers.

3) Light Tomato: Found in the Pee Dee and upper part of the state. A light mix of the vinegar/pepper sauce with ketchup or tomato added.

This blog was written by Sydney Vaile of the Robinson-Spangler Carolina Room at the Charlotte Mecklenburg Library.